Originating in Europe, Eurasian watermilfoil is an invasive aquatic plant that usually grows at depths of 1 to 4 metres and can form a dense carpet on the lake’s surface. According to Environment Canada, “this plant not only pushes out indigenous plant species, but may also be harmful to fish populations by crowding out their spawning grounds.”

Lake Association bouys warn of milfoil at or below the surface - stay clear! 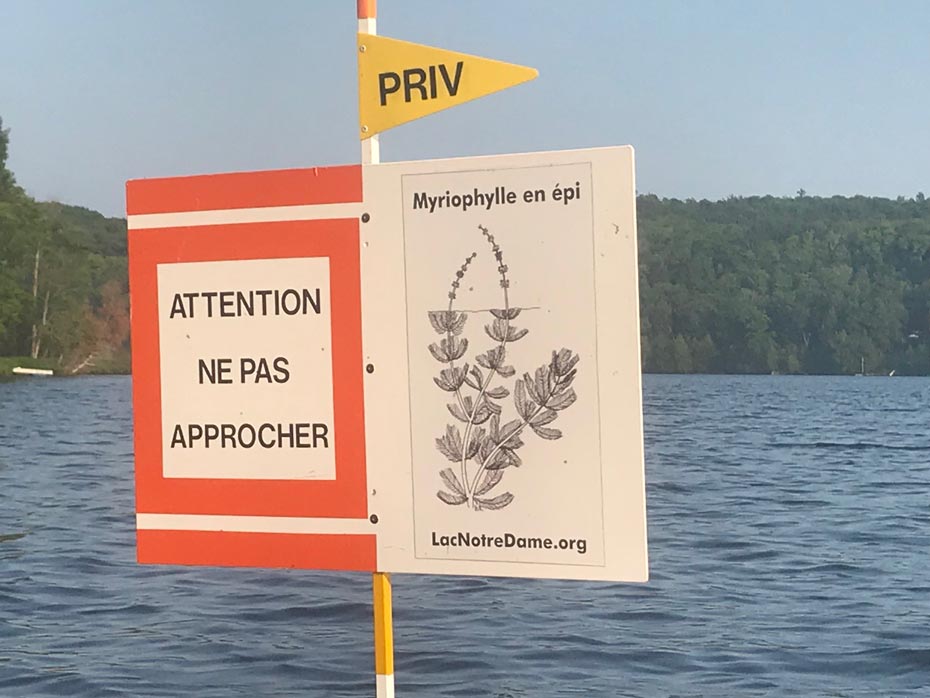 History of Milfoil in Lac Notre-Dame and Usher

The Association was founded in 2004 in response to the Eurasian Milfoil explosion in the lakes. The Association received valued advice and assistance from biologist Paul Hamilton of the Canadian Museum of Nature. Mr. Hamilton has continued to support the Lake's efforts by monitoring our water testing results and advising us about important changes in the water quality.

The cutter required mounting on a barge and a team of 10-12 volunteers to manage both the cutter and the manual labour of removing the heavy cuttings from the water. After a few years, as the weed levels naturally declined, & the cutter was no longer used due to the huge amount of effort required to organize a volunteer team, boats, fuel and strong bodies. The barge was destroyed in 2010, as it was stored at Camp Kalalla, and was a danger to the camp.

* The Association did not renew the insurance for the cutter; therefore future users would need to sign a waiver to borrow the cutter and would have to return it in the same condition that they received it in. No one has done so since 2010.